"Romaine is a realist who enjoys thick paint and solid geometry,” says John T Spike, international art critic for Art & Antiques Magazine, in his 2006 “Closer Look” at Romaine’s painting, “Lion Park Surround”. “This glimpse of Western storefronts is as carefully composed as Hopper’s ‘Early Sunday Morning’, which in turn is a Mondrian in bricks and mortar. Achieving these effects requires reflection...Seventy years after Hopper, the buildings are the same, yet the plot has changed. To Hopper’s habitual question, ‘Isn’t this sad?’ Romaine seems to respond: This is how it is.”

Romaine began her professional career in 2000 and has enjoyed considerable success since then with her work in numerous private and corporate collections and at the Gibbes Museum. She has been a member of Oil Painters of America since 2001 and was invited to be Artist in Residence by the Gibbes Museum, Charleston, SC, for the year 2003/2004. She and photographer, Jack Alterman, published "Cornices of Charleston", a book of her paintings and his photographs, in 2005. Romaine is represented by galleries in Charleston, South Carolina and Santa Fe, New Mexico.

My search for inspiration this past year had me taking the long way home or to my destination. What I found were small towns and often solitary sites of commerce that had been bypassed by the mass movement of people on our highways; the inner part of America that we usually don't see, the part often most affected by the events of our times -- past and present -- and that in one way or another evoke a sense of valiance in the face of adversity.

It is not enough that the image that intrigues me enough to paint it is merely a symbol of beauty. I must also sense a depth to it at first blush. As I paint an image that works for me, quite frequently, I begin to see multiple levels of symbolism in it that I hadn't noticed in that first blush. I learn something more about the place and get a far deeper sense of the people who made or occupy it. It is this studio-bound journey of discovery, those "ah ha" moments, that keeps that brush of mine moving across the canvas. This was the case for the images I painted for "Back Roads". 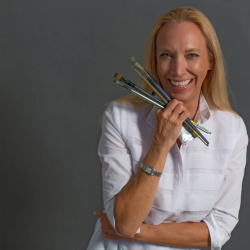 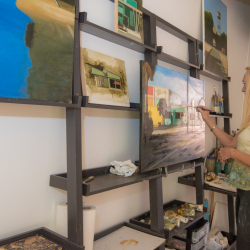 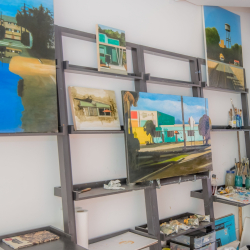