Downtown Delray Beach has become a growing source of pride for the city and its citizens, with millions invested in public and private development over the past 25 years, resulting in a revitalization that inspires people to live, work and play in the urban core every day. Known as Delray Beach’s living room because of its community spirit and central location, people gather to enjoy the comfortable urban neighborhood setting that only downtown provides. For those who reside in one of the distinctive apartments or homes, the downtown is not only their living room, but also their dining room, kitchen and backyard as well! Please see Maintenance of Traffic (MOT) plan for road closure for repainting of the Pride Intersection located at NE 2nd Ave and NW 1st St. The intersection will be closed for 4 days.
See Map 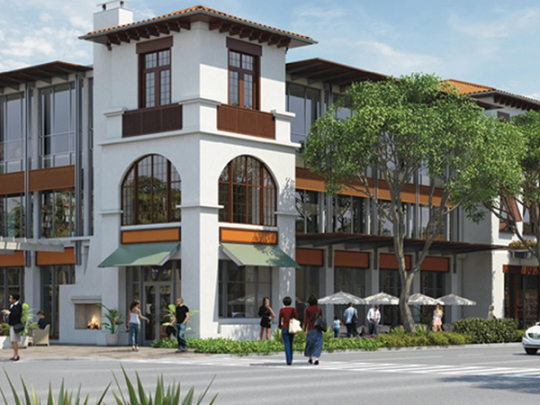 Located on the northeast corner of Federal Highway and Atlantic Avenue spanning two blocks east. The project will include 82 condos, 261 apartments, 83,000 square feet of office space and 76,000 square feet of shops and restaurants.
Visit WebsiteConstruction Update

The project consists of a new 143 room hotel with 960 square feet of meeting space.
View Project 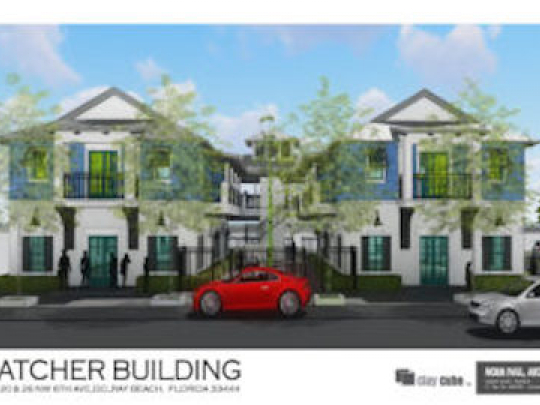 Local business, Hatcher Construction & Development, Inc., will not only be creating a new office space for themselves, but will also open up the space to other local businesses that might need a location to operate and thrive.
Learn More

Swinton Ave. Resurfacing Project in Delray Beach begins contract time this Tuesday, Apr. 14, 2020. No lane closures are expected through this first week, as the contractor will be focusing on installing signage, mobilizing equipment and prepping to begin work activities.

Description: This 1.5-mile roadway improvements project is expected to begin Tuesday, Apr. 14, 2020, in the city of Delray Beach. Work includes milling and resurfacing, adding 5-foot wide sidewalk on the west side of the roadway from S 10th Street to S 3rd Street, drainage, signage and pavement marking upgrades including roadway striping for shared use travel lanes, and minor signalization improvements to existing equipment.

construction activities at the above referenced project on April 13, 2020 until November 20, 2020. There

are closures that will happen along SE 3rd Ave. See attached document to show the exact dates when

the MOT will be happening so you can plan accordingly.

All of our construction related activities are scheduled to take place between 7:00 A.M. and 6:00 P.M.

on weekdays and occasionally on Saturday. We intend to keep noise down to a minimum, take measures

to control dust, and coordinate the movement of vehicles to minimize traffic interruptions for the

of the project for you, your family and your property.

DBMConstructionInfo@gmail.com and we will be glad to help in any way possible.

See attached MOT plan A, B & C for the construction of the concrete shell

We would like to take this opportunity to address the 4 A.M. start time on January 03, 2020. The reasons for the early morning concrete pours are to minimize traffic congestion during the day and to allow sufficient time for not only the concrete pours, but the finishing required after the pours. Additionally, we wanted to mitigate our impact to the adjacent restaurants. We recognize that it was louder than anticipated and it caused a disruption to you, the residents. We apologize.

Going forward we have adjusted our schedule for the remaining extended pours to 6 am, Prior to each extended pour, we will send out notices at least three days in advance to advise you of the extended hours.

We would like to extend our appreciation for your patience. We understand the inconveniences to you during this construction process and we will do our best to minimize the impact of the project for you, your family and your property.

If you have any concerns or questions that you would like addressed, please contact us at RayConstructionInfo@mosscm.com and we will be glad to help in any way possible.

The Contractor is set to begin the next big phase of the Beach Project with the Asphalt Stamping at the intersections. This work is scheduled to begin Tuesday night, November 5th from the hours of 9 pm till 6 am the following morning. This will be the schedule for this week:

- Crews will begin the process of stamping and painting a red brick herringbone pattern on the new asphalt pavement at the following intersections. Temporary lanes closures will be set up with flaggers in place for traffic control.

The work sequence for the remainder of this week is as follows:

The above work schedule is weather dependent and is subject to change. The remainder of the pavement stamping work is planned over the next three weeks- stay tuned for future schedule updates

DELRAY BEACH, Fla.–October 10, 2019 - Spanning two city blocks, the $300 million Atlantic Crossing mixed-use destination designed to transform the east end of Downtown Delray Beach’s nationally recognized Atlantic Avenue is on track to begin vertical construction by year-end, according to the owner, The Edwards Companies. With the western block’s underground parking garage and infrastructure well underway, the Company announced the start of active leasing with three lead tenants signed for retail and office space that is projected to open beginning in the fourth quarter 2020.

Representing the largest private investment in the City’s history, the venture by Columbus, Ohio-based Edwards Companies is bringing first-of-its-kind high-quality retail and restaurant space (73,000 sf), Downtown’s first Class A office quarters (83,000 sf), and new luxury residences to the heart of the City.

“Atlantic Avenue is nationally known and demand is strong. Our timetable allows us to be selective and to identify “best of class” commercial tenants for the project,” said Edward Companies Vice President Don DeVere. Lead tenant Merrill Lynch will occupy the entire 20,000-sf third floor - half the available office space in the first building - and Chico’s has signed for a 3,150 sf shop fronting Atlantic Ave. The first restaurant tenant, Chicago-based The Hampton Social, a lifestyle experience concept, has leased 8,677 square feet. Several additional tenant prospects are in active negotiations, DeVere said.

Atlantic Crossing’s nine-acre site has 560 feet of frontage along Atlantic Avenue and is bounded by Federal Highway (US1) to the west and the City’s Veterans Park along the Intracoastal Waterway to the east. The western block is fully financed with a $110 million construction loan and a $45 million preferred equity investment.

“The Delray market is highly desirable, but has lacked new, high-quality retail and restaurant space with associated parking,” DeVere said. Plus, for the first time, mid- to large companies can locate in Downtown Delray Beach as Atlantic Crossing introduces 20,000 sf floorplates.

“Atlantic Crossing is coming online at an exciting turning point,” according to Drew M. Barkett of Strategic Retail Advisors, exclusive retail leasing agent. “Retailers and restaurateurs are looking to ‘High Street’ opportunities, rather than enclosed malls or lifestyle centers.  Atlantic Crossing delivers the authentic sense of place to draw today’s shoppers and diners, and to become the ‘must-see’ spot for out of towners.”

Commitments elsewhere in the Downtown by national retailers are validating the market’s appeal, and three new downtown hotels, the state’s largest food hall, and new residential developments are slated for the area.

Downtown Delray Beach offers “one of the strongest retail scenarios in the country,” according to Robert Gibbs, a nationally known retail consultant and author whose 2017 Shopabilility study found the primary market area can support 434,000 sf of new retail, generating $221 million in retail sales. The study pegged Delray Beach as one of the nation’s Top 10 Downtowns, with the potential to become a Carmel by the Sea or Nantucket. USA Today listed Delray Beach’s Atlantic Avenue among 10 Great American Shopping Streets (5-5-17), noting that 20,000 people can visit its hundreds of shops and restaurants in a day.

For retailers, Atlantic Crossing’s demographics are compelling. Total population within five miles is 150,752, and within one mile, average household income tops $100,000. Also, Downtown draws hundreds of thousands of visitors each year, and Atlantic Crossing’s new residents alone are projected to generate more than $6 million in new spending annually.

In line with Downtown Delray’s eclectic feel and walkability, each of Atlantic Crossing’s six buildings of three to five stories has a different architectural design. All parking is hidden, below ground or in a garage wrapped by residences, and convenient valet service is provided. Completion of the first luxury residential residences is anticipated for ­­­­­­­­­2021, with additional park-side residential units added in 2023. 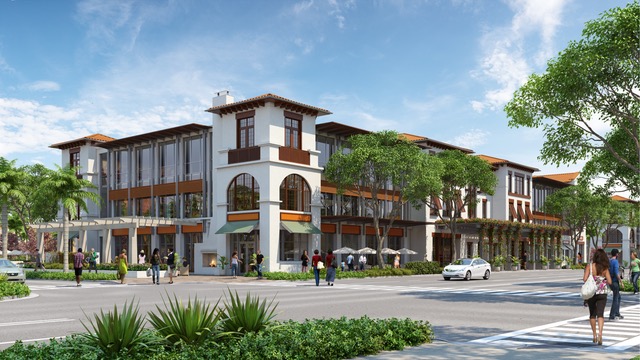 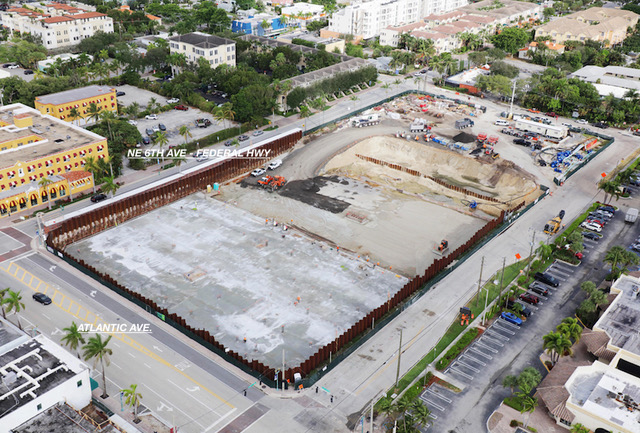